/ Our Parish / Our Icons
Our Icons

Although the architectural plan of St. Innocent is simple, and it is plain on the outside, the interior is magnificent! Seventy-five full-length icons of saints (plus the Pantocrator and thirteen other icons), many of whom were recently glorified, cover every wall of the temple (nave, sanctuary, narthex and vestry), and contribute enormously to creating a very spiritual environment for prayer and worship. Because the saints literally surround the worshipper, they graphically convey the reality that in Divine Worship, we are elevated to the heavenly realm, where we "represent the cherubim" who constantly sing the Lord's praises around His throne. During Divine Services at St. Innocent, the church is always full with the presence of these saints.

The iconographic program is unique: it includes 12 American saints, plus women and men saints of many different countries, including 8 African saints, (reflecting the multi-ethnic character of the parish and of Orthodoxy in America), most of whom have been recently glorified, and some older national patron saints.

On the [liturgical] east wall behind the altar there is a large deisis, with Christ in Majesty in the center (above, center), flanked on the left by the Mother of God, the Archangel St. Gabriel, St. Seraphim of Sarov and St. Cosmas Aitolos (above, left); and on the right by St. John the Forerunner/Baptist, the Archangel St. Michael, St. Sergius of Radonezh and St. Nectarios of Aegina (above, right). 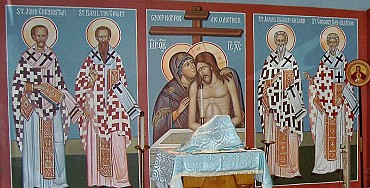 On the left (liturgical north) wall of the sanctuary, behind the Proskomedia table (above, left), is an icon of Christ being mourned by His Mother, flanked by the writers of the four Divine Liturgies: Saints John Chrysostom, Basil the Great, James of Jerusalem and Gregory, Pope of Rome (from left to right).

On the right (liturgical south) wall of the sanctuary (above, right) are: Saints Sava of Serbia; Sofrony of Vraca, Bulgaria; Joseph of Damascus, Syria; and Gorazd of Czechoslovakia (from left to right).

On the rear (liturgical west) wall of the nave are icons of 5 male saints (from left to right): Saints Alexis Toth of Wilkes Barre, Pennsylvania; Yakov (Jacob) Netsvetov of Alaska; the child Gabriel of Poland; John the Romanian; and Maxym Sandovich of Galicia; and of 5 female saints: Saints Grand Duchess Elizabeth Romanova; Zlata/Chryse of Bulgaria; the child Irene of Lesvos, Greece; Angelina of Serbia; and Juliana Lazareva of Russia (from left to right).

The first of the series of icons that Fr. Roman commissioned to be painted by Fr. Theodore Jurewicz of Erie, PA, were done in 1991. They line the north and south walls of the nave, in between the windows.

Starting on the left of the liturgical north wall going from the back of the church towards the front, are the full-length and life-size icons of: Grand Prince St. Vladimir and Princess St. Olga (above, left), Patriarch St. Job of Moscow (above center); St. Maximus the Greek (above right); St. Theophan the Recluse (above left); a larger icon on the solea depicting the first 5 of the American saints to be canonized/glorified, (above, center, from left to right): St. Herman of Alaska; St. Peter the Aleut; St. Innocent of Alaska, Metropolitan of Moscow; Patriarch St. Tikhon; and Hieromartyr Juvenaly; 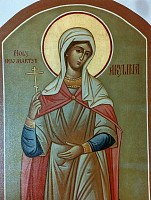 St. Ambrose the Elder of Optina (above left); St. Nicholai Velimirovich (above, center); and  Saints Constantine and Helen (above, right).

In the sacristy/vestry, across the rear wall, (above, from left to right) are icons of Saints Alexander Khotovitsky, who was responsible for the construction of St. Nicholas Cathedral in New York City; and John Kochurov, who was responsible for the construction of the Holy Trinity Cathedral in Chicago; Metropolitan Seraphim of St. Petersburg, who compiled the Chronicles of Diveyevo Monastery, which led to the glorification / canonization of St. Seraphim of Sarov in 1903; Savas the New of Greece; and Justin of Chelije, Serbia (left). In October 2003 eight additional saints were added on two other walls in the confessional area of the vestry-sacristy, including (above, left; from left to right): St. Moses the Ethiopian; St. Luke the Physician, Bishop of Simferople in the Crimea; Hieromartyr Platon, Bishop of Banja Luka in Serbia; and Bishop St. Raphael of Brooklyn.

On the adjacent wall are four more contemporary saints (above center; from left to right): St. Mitrophan of Beijing; St. Anthimus of Chios; St. Antipas the Hesychast; and Hieromartyr George of Serbia.

Also painted at this time was a wonderful large icon on the wall of the narthex/vestibule (above, right), opposite the doors into the temple, of three contemporary 20th century women saints who manifested their love for God by helping people in the middle of large cities: (from left to right) St. Mother Maria Skobtsova of Paris; Blessed Eldress St. Matrona the Blind of Moscow; and Eldress Mother Gavrilia of Athens. At that time the ceiling of the nave was also partially painted with angels in clouds.

In October 2004 the nave ceiling was completed, adding four more angels (above, left), plus a magnificent Christ Pantocrator in the center (above, center), over the central icon tetrapod.

In October 2005 seven additional icons were added, including St. Vasily, a Polish priest and martyr. He is another 20th century saint who labored in America in the early twentieth century, at the time when Patriarch St. Tikhon was Bishop of America. His icon (above, right) is located on the inside of the door to the vestry/sacristy. He is the twelfth American saint whose icon is on the walls of St. Innocent Church. At the same time two groups of three saints were added in the narthex/vestibule. As one enters the door from the street, to the left, at the bottom of the stairs is a full size icon of three African saints (above, left): St. Mary of Egypt, St. Athanasius, and St. Maurice of the Theban Legion (martyred in Gaul).

At the top of the stairs, to the right of the doors into the temple, and in front of the candle stand, is a group of three twentieth century "fools for Christ" (above, center): Blessed Maria of Divyeyevo, St. John Maximovitch, Archbishop of Shanghai and San Francisco, and Blessed Praskovia of Divyeyevo.

In April-May 2006 our iconographer, Fr. Theodore Jurewicz, completed the iconographic work in the main entrance-narthex. He added an additional three African saints, opposite the three done the previous October, and which flank the main entrance. This new group of three saints (above, right) portray the Martyr Sophia of Egypt; King Elesbaan of Ethiopia; and the Ethiopian Eunuch, Chief Treasurer of Queen Candace of Ethiopia, who was converted by St. Phillip the Deacon, as recorded in the Acts of the Apostles, chapter 7. 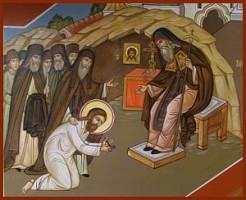 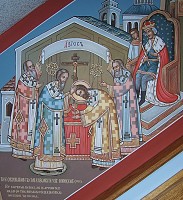 At this same time on either side of the stairs going up from the street level to the church are six scenes of the life of our patron saint, St. Innocent of Irkutsk. These scenes are: (1) his tonsuring as a monk (above, left); (2) his consecration as a bishop (above, center); (3) his teaching the local people in the school and seminary that he established in Irkutsk (above, right); (4) his burial (above, left); (5) his wonder-working relics being removed by the communists and placed in a museum (above, center); and (6) his precious relics being returned to Irkutsk on September 2, 1990 and placed in the Bishop's Cathedral at the Znamensky Women's Monastery (above, right).

In the Fall of 2003 two small panel  icons were commissioned  —  copies of icons noted for many healings — the Mother of God "Queen of All," Healer of Cancer and other infirmities (above left), and the Mother of God "of the Inexhaustible Cup," Healer of alcoholism, drug-addiction and other addictions and mental problems (above, right). In July 2005 we were elated to receive a third commissioned wonder-working icon of the Mother of God — the "Joy of All Who Sorrow" (above, center). All three of these icons were written/painted by a nun at Holy Dormition Monastery in Rives Junction, Michigan.

In addition to the large icons of the 72 saints (plus 15 other icons) that cover all the walls and ceiling, Fr. Roman also arranged to have the same iconographer (Fr. Theodore Jurewicz of Erie, PA) paint smaller panel icons on wood of St. Innocent of Irkutsk (above, left), St. Herman of Alaska (above, center) and St. Alexis of Wilkes Barre (above, right), with small, round reliquaries with particles of the saint's relics fastened at the bottom of the icons.

AMERICAN SAINTS:  St. Innocent of Alaska (above, left), Enlightener of North America and Metropolitan of Moscow, Patriarch St. Tikhon (above, center), and St. Raphael of Brooklyn (above, right);

UKRAINIAN SAINTS:  St. Nestor the Chronicler (above, left) and Canonarch St. Gerontius of the Kiev Caves (above, right);

ANCIENT SAINTS:  and finally, we also have two other hand-painted panel icons of two ancient saints, without relics: Great Healer Panteleimon (above, left), and St. Moses the Black (above, right).

All of these icons are located on the window ledges in the nave, with hanging lampadas above them, readily available for veneration at each Divine Service.

***Reproduction and distribution of these images without written permission of St. Innocent of Irkutsk Russian Orthodox Church is prohibited. © 2019***