/ Our Parish / Our Clergy

Our Patriarch is His Holiness Kirill of Moscow and All Russia.

After graduation from school, he entered the Leningrad Seminary and later the Leningrad Theological Academy, from which he graduated cum laude in 1970. On April 3, 1969, Metropolitan Nikodim (Rotov) of Leningrad and Novgorod tonsured him with the name of Kirill and on April 7 ordained him as hierodeacon and on June 1 as hieromonk. From 1970 to 1971 Father Kirill taught Dogmatic Theology and acted as rector’s assistant for students’ affairs at the Leningrad Theological Schools and at the same time worked as personal secretary to Metropolitan Nikodim and supervising instructor of the first-grade seminarians. He was elevated to the rank of Archimandrite on September 12, 1971. From 1971 to 1974, he was Moscow Patriarchate representative at the World Council of Churches in Geneva. From December 26, 1974, to December 26, 1984, he was rector of the Leningrad Seminary and Theological Academy.

On March 14, 1976, Archimandrite Kirill was consecrated Bishop of Vyborg, Vicar of the Leningrad Diocese. On September 2, 1977, he was elevated to the rank of Archbishop. From December 26, 1984, he was appointed as Archbishop of Smolensk and Vyazma. From 1986 – Administrator of the Parishes in the Kaliningrad Region. From 1988 he became the Archbishop of Smolensk and Kaliningrad. On November 13, 1989, he was appointed the Chairman of the Department for External Church Relations and a Permanent Member of the Holy Synod.

On February 25, 1991, Archbishop Kirill was elevated to the rank of Metropolitan. On January 27, 2009, the Local Council of the Russian Orthodox Church elected him Patriarch of Moscow and All Russia. His Holiness Patriarch Kirill was enthroned on February 1, 2009.

As a parish of the Moscow Patriarchate, our Hierarch is the Patriarch himself. Our Vicar Bishop is His Grace Matthew, Bishop of Sourozh, temporary Administrator of the Patriarchal Parishes in the USA.

He was nominated as bishop on November 5, 2015 in the Church of the Meeting of the Vladimir Icon of the Mother of God at the Patriarch's Residence in Chisty Lane, Moscow. He was consecrated on November 15 at the Divine Liturgy at the Cathedral of Christ the Savior in Kaliningrad. His Holiness Patriarch Kirill of Moscow and All Russia headed the Divine Services.

By the decision of the Holy Synod of July 29, 2017 (Journal No. 52), he was appointed the Administrator of the parishes of the Moscow Patriarchate in Italy with the title "Bogorodsky" and Rector of the Stavropegic Church of St. Catherine the Great Martyr in Rome and released from the administration of the Skopin diocese.

By the decision of the Holy Synod of December 28, 2017 (Journal No. 116), he was released  from the administration of the parishes of the Moscow Patriarchate in Italy and appointed as Ruling Bishop of the Diocese of Sourozh.

By the decision of the Holy Synod of October 14, 2018 (Journal No. 77), he was appointed temporary administrator of the parishes of the Moscow Patriarchate in the United States of America. Our Rector is The Reverend Father Joshua Genig. Fr. Joshua holds an M.Div. (Masters of Divinity) degree in Pastoral Theology and Systematic Theology from Concordia Theological Seminary and a Ph.D. (Doctor of Philosophy) degree in Systematic Theology from the University of St. Andrews in Scotland. Fr. Joshua also completed a Chaplain Residency at the University of Michigan Medical Center, working in Trauma, Emergency, and ICU settings. Currently, he serves as a Staff Chaplain and Priest at St. Joseph Mercy Hospital in Ann Arbor, MI. In addition to his priestly responsibilities, Fr. Joshua serves on the faculty of the Orthodox School of Theology at Trinity College of the University of Toronto, Canada and at Purdue University (Northwest Campus). Fr. Joshua also serves as a Chaplain for the Detroit Fire Department.

Prior to entering the Holy Orthodox Church, Father Joshua was a Lutheran minister for seven years. He was ordained to the Holy Diaconate by Bishop John of Naro-Fominsk (now Metropolitan John) on November 12, 2016 and then to the Sacred Priesthood on the Feast of Pentecost, June 4, 2017. Fr. Joshua was appointed Rector of St. Innocent in November 2018. Fr. Joshua also serves as Dean of the Central States Deanery of the Russian Orthodox Church - Moscow Patriarchate.

Fr. Joshua is married to Matushka Abigail, a local middle-school teacher, and they are blessed with five young daughters who are active members of St. Innocent. 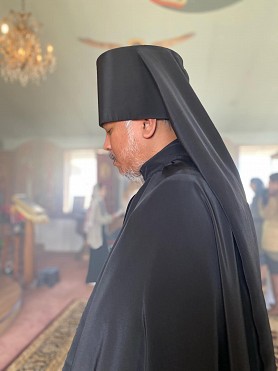 Our Deacon is Hierodeacon Seraphim (Balagtas) who was born and raised on the island called Negros Oriental in the Philippines. During his childhood, he attended both public and Catholic schools. At the age of 15, he entered the Augustinian Recollect Order and remained with them until 2005. During his theological and academic formation, he received the BA in Classical Philosophy (Casiciaco Recoletos Seminary in Baguio City, Philippines), the Bachelor Degree in Sacred Theology (Royal Pontifical University of Sto. Tomás, in Manila, Philippines), and the MA in Theology (San Sebastián College - Recoletos de Manila in Manila, Philippines).

Fr. Seraphim was ordained a deacon in the Roman Catholic Church on April 20, 2003 and was received into the clerical state in the Russian Orthodox Church on April 1, 2007 by Bishop Merkury (now Metropolitan and General Director of Sofrino). He then entered the Russian Orthodox Monastery of St. Mary of Egypt in September of 2005 as a novice. Fr. Seraphim was tonsured a ryassaphore monk in the summer of 2007 with the blessing of His Holiness Patriarch Kirill and Bishop Merkury. In 2008, he received the award and blessing of the right to wear the double orarion by Archbishop Justinian. Finally, on April 13, 2013, he was tonsured to the small schema (or mantya).

Fr. Seraphim was assigned to St. Innocent on June 19, 2019 by the decree of Bishop Matthew. The Right Reverend Mitered Archpriest Roman Star, a native of Pennsylvania, studied at St. Vladimir’s Seminary from 1964 until 1968. He was ordained a priest on April 29, 1984 by Bishop Clement (now Metropolitan of Kaluga), and he has been a cleric of St. Innocent Church since 1984. Fr. Roman was granted retirement as Rector in 2018 and remains attached as a cleric of the parish.

In addition to his pastoral service, Fr. Roman has previously served as Dean of the Central States Deanery of the Moscow Patriarchate and remains a member of the Bishop's Council. He is also very active with local Redford activities.